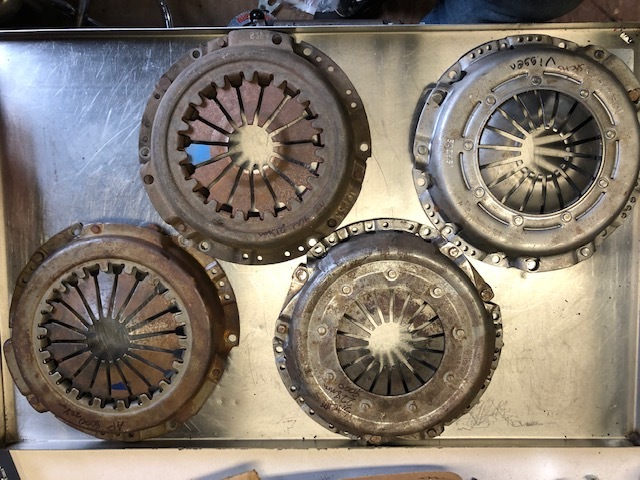 Is bigger always better? I test several clutch options to find which is the best setup for your classic SAAB 900

For many years I've gone along with the standard recommendations for an "upgraded" clutch kit for my classic 900. But, after having some slipping issues with my own T5 converted SAAB, I decided to do some testing to figure out the facts with real data.

One of the biggest misconceptions I see is the idea that a larger friction surface has more "grip" than a smaller surface. Which I'll admit, sounds right. However, if you think back to high-school physics class, you might remember an example of how a thin road tire manages to keep the bike firmly planted on the road, despite the very small amount of contact it makes. The reason is simply that Pressure = Force / Area. As the applied area gets larger, the pressure acting on that area spreads out (is less) , while the force remains constant. In practical terms for clutch or brake components, it means that when you apply a constant force to either the brake pad or the clutch disc, the force it exerts (the stopping or holding power it has) does not change simply because it has a larger area of grippy stuff. That is why we have units of pressure like psi-- Pounds (force) per Square Inch (Area).

The other key component in the torque holding capacity of a clutch is the friction material. For these tests I'm going to assume that all of the OE (Original Equipment) manufacturers are going to use a compound with similar friction coefficients. If you are looking at aftermarket performance materials, then that all goes out the window, so we'll stay focused on OE options. Now that we've established that the size of the disc is mostly irrelevant and the friction material is all the same, then we are just looking at one thing--pressure.

If we can determine how much pressure it takes to push the clutch plate down, then we know how much pressure the clutch plate is exerting back up. The pressure plate has an internal spring that generates the clamping force. The clamping force exerted changes based on the position of the clutch plate through its travel. Unlike a typical spring that has a fairly steady rate that increases the farther it is compressed, the disc spring used in the clutch acts very differently. Pressure ramps up as the spring starts to compress, but it reaches a certain point when the spring flattens out and the clamping pressure drops off a cliff. The trick is to know where the pressures are highest so you can stay within that sweet spot. 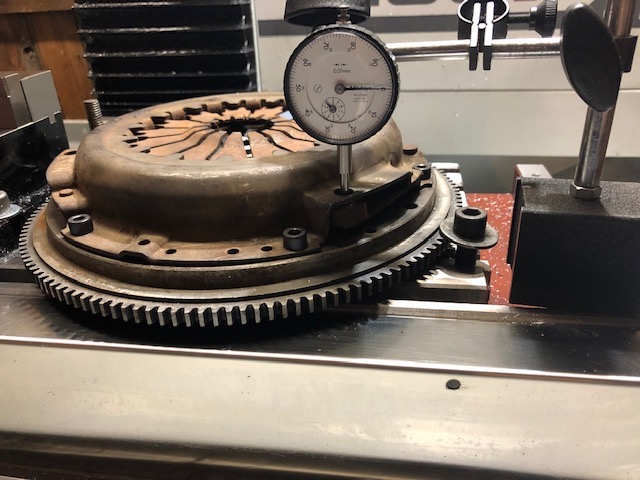 When the clutch cover plate is bolted to the flywheel with a friction disc sandwich, the plate is moved a certain distance. What we want to know is what that distance is, to correlate it to how much pressure it's exerting. Without having to calculate the actual torque holding capacity of each clutch, this will give us a relative marker of performance between each pressure plate combination.

This started out to be a fairly pragmatic approach and maybe not the be-all-end-all of the scientific method. My clutch samples are various parts that I either had on hand or aquired from friends. Again, some of them might be used parts or old part numbers no longer manufactured, but it should give a general idea of their performance. The contenders include: 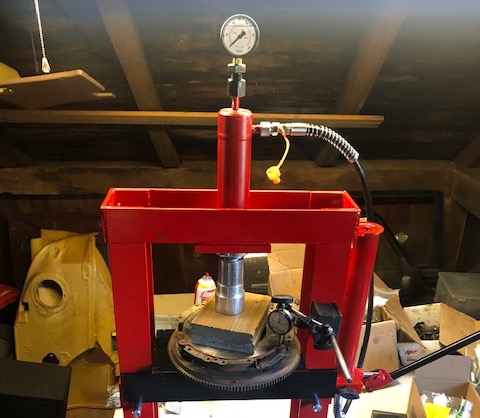 Giving them the squeeze

The torture chamber setup is the following; Each pressure plate is put into the hydraulic press that has a 2000psi pressure gauge attached to it. The pressure required to press the plate down is equal to its clamping load at that position in its travel. I also have attached a dial indicator to measure the movement of the pressure plate to aid in plotting a point of travel vs pressure. For example, to move the plate 1mm, it requires 200psi of pressure.

Here we are looking at each pressure value in psi over each millimeter of travel (sorry, mixing units I know)

*Designates the assembled pressure
** The Viggen pressure plate was originaly designed to use the NG900/9-3 flywheel that has a ~2mm step. This step effectively reduces travel and increases pressure to the maximum clamping levels. When bolted to the c900 flywheel this is reduced.

What does it mean?

It means that the size of the clutch kit may not be a direct indicator of performance. It is worth mentioning that there is a mechanical advantage in terms of leverage on a larger disc, but the difference between the mean (average) diameters is pretty marginal compared to the pressure differences possible.

What it also means is that we can greatly affect the performance of our stock clutch by tuning this height to reach maximum clamping force while still maintaining standard OE materials and drivability. Moving the assembled height of the pressure plate a few millimeters can increase the clamping pressure by over 40%!

So how do we take advantage of this?

Option 1: Would be to use shims under the pressure plate sandwiched between the flywheel. This mimics the "step" machined into later SAAB flywheels. This has the advantage of being tunable as you can add or remove shims to get not only the increased pressured but also make sure you're in the allowable range of travel for the slave cylinder to operate. It has a major disadvantage of being extremely fiddly. I can't imaging sliding more than one shim behind the pressure plate at a time while keeping everything in position upon assembly.

Option 2:A machined face in the flywheel to create a "step". This is a permanent solution that would give you the ideal positioning needed. It also has the benefit of offsetting the increase in stack height of the complete clutch assembly. The side effect of reducing the plate travel is that the fingers where the throw out bearing ride will not be moved as much, thus creating a taller total assembly. Having a step in the flywheel can correct this by lowering the plate. More work has to be done here on my part to test some combos but I'll probably be offering a solution for those needing increased holding capacities for their street cars. It often makes sense for Trionic 5 converted cars since the torque onset is much sooner than the factory equipment.

What else affects performance?

I'm glad you asked! Weight. Weight is (almost) always the enemy in terms of performance. In the case of the clutch assembly, increased weight not only slows the reaction to throttle inputs and sucks horsepower, but it also adds increased wear on transmission parts, specifically the synchronizers. Their job is to effectly speed up or slow down the rest of the internal transmission parts based on your selected gear and engine RPM. Adding mass simply makes their job harder.

The Early 2.3 9000 clutch kit has a unique combination of large pressure plate and the correct friction disc splines to match the 900. Later 9000 (94+) clutch kits use a different input shaft with fewer splines so that is what makes those incompatible. Having fairly narrow fitment, these kits are extremely hard to find and usually very expensive. Also, because of the size of the pressure plate, it was often used in conjunction with the same generation 90-93 9000 flywheel because it uses a different bolt pattern and is also thinner to offset the bulk of the kit. Even after getting your hands on one, some modification is required. My reasoning for including it in this comparison, is it is often mentioned when talking about high-horse power builds and known for its torque holding ability.

The Viggen clutch option is a new one. I saw it has a high torque capacity and is factory spec in a car that has more torque than most 900s dream of. Once again, the friction disc is going to be incompatible with our 900s so you're best off just looking for the pressure plate which still is available. It also needs some modification fit to the 900 flywheel, but that would only be worth looking into if it offered some performance gain, which it looks like it does!

Don't be fooled by the bigger is better mantra. Depending on what kind of power levels you're looking for you should run the smallest/lightest configuration that meets your needs. Since the flywheel does depend on its mass to maintain a smooth running engine and easy gear changes, you want don't want to remove all mass possible on a street driven car, but there are certainly gains to be made in overall driving pleasure. I'll be taking a deeper look at how we can increase the holding capacity of the 228mm pressure plates as well as developing a setup for the "Viggen" clutch kit to work on our classic 900s. 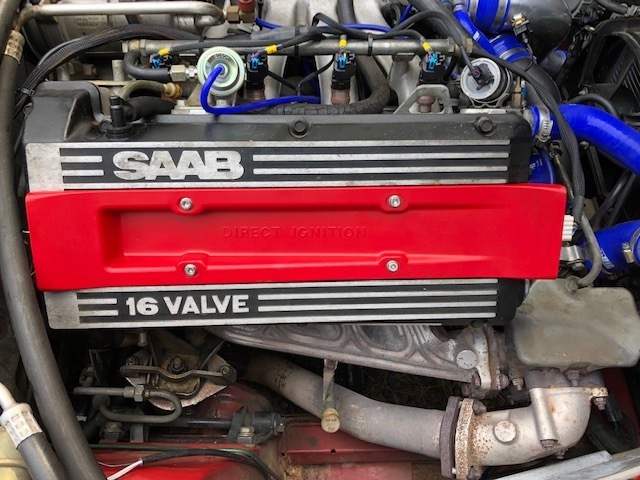 Trionic 5 Conversion: What you need

Everyone remembers their first time. The first time they heard the the words Trionic 5 (T5 for short) in reference to some sort of whiz-bang conversion that the cool kids are doing. So you think to yourself...

END_OF_DOCUMENT_TOKEN_TO_BE_REPLACED 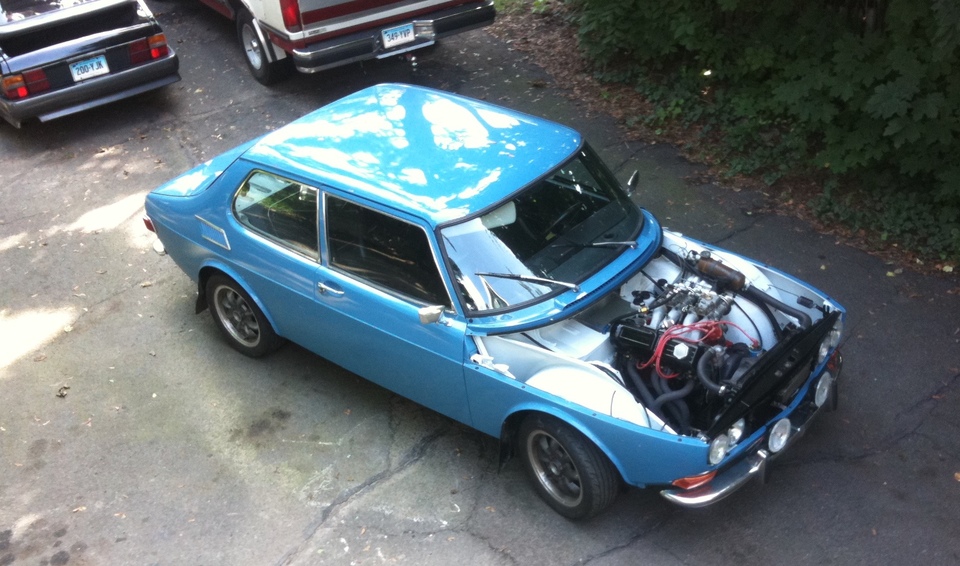 Yes, It IS an Oxymoron.

I Thought I'd take a moment to introduce myself and tell you a little about Modern Classic SAAB.